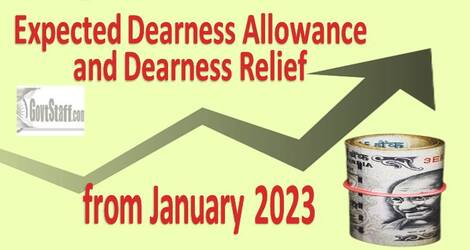 The All-India CPI-IW for July, 2022 increased by 0.7 points and stood at 129.9 (one hundred twenty nine point nine). This increase in CPI-IW is opening the account of Expected DA/DR from January, 2023 i.r.o. Central Govt Employees and Pensioners with score 1% increase in 1st month.  Rest of 5 months CPI-IW index will confirm the exact figure of DA/DR of Jan, 2023.

The DA/DR from July, 2022 has also confirmed to be 38% with 4 percent increase in existing rate.  As per prevailing practice this increase will be approved by Cabinet in the month of September, 2022.  The Central Govt. Employees and Pensioners are eagerly waiting for Cabinet Approval and issuance of DoE OM in this regard. A Fake order circulating on Social Media is claiming that the additional instalment of Dearness Allowance will be effective from 01.07.2022. Readers are requested to be aware from such false information.

The Labour Bureau, an attached office of the M/o Labour & Employment, has been compiling Consumer Price Index for Industrial Workers every month on the basis of retail prices collected from 317 markets spread over 88 industrially important centres in the country. The index is compiled for 88 centres and All-India and is released on the last working day of succeeding month. The index for the month of July, 2022 is being released in this press release.

The All-India CPI-IW for July, 2022 increased by 0.7 points and stood at 129.9 (one hundred twenty nine point nine). On 1-month percentage change, it increased by 0.54 per cent with respect to previous month compared to an increase of 0.90 per cent recorded between corresponding months a year ago.

News 864
Newer Post
Refund of RD Default fee due to the unforeseen failure of CBS Finacle system: Department of Post
Older Post
Sanction for Holding and Elective Office under CCS (Conduct) Rules, 1964 by a Government Servant – Updated Instructions by DOPT