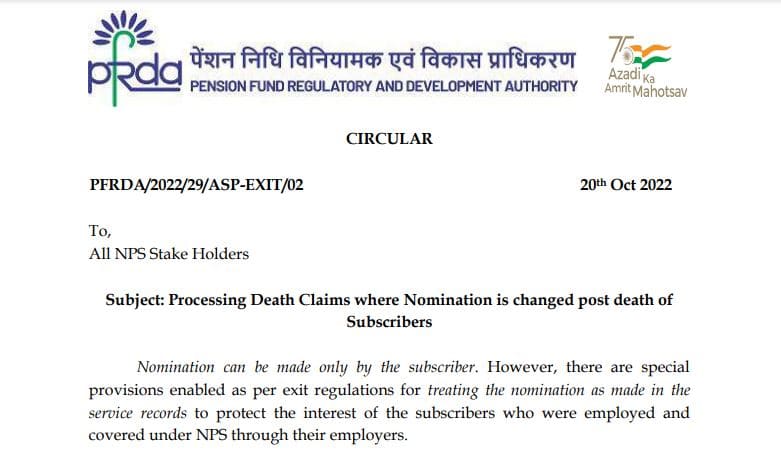 To,
All NPS Stake Holders

Nomination can be made only by the subscriber. However, there are special provisions enabled as per exit regulations for treating the nomination as made in the service records to protect the interest of the subscribers who were employed and covered under NPS through their employers.

The following points are clariﬁed for the beneﬁt of various intermediaries which are associated with exit processing viz Nodal oﬃcers of Govt/ Non Govt Sector, POPs and NPST in order to facilitate seamless claim processing. 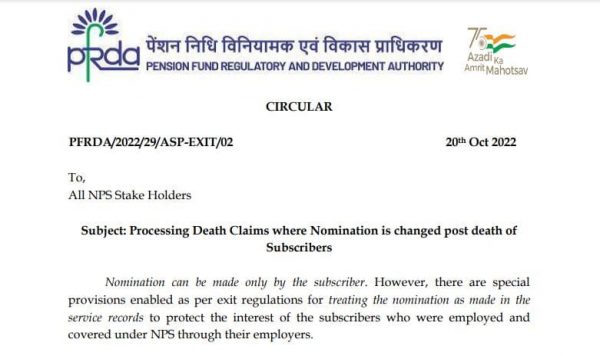 Regulation 32. Nomination. – Notwithstanding anything contained in these regulations or in any other law for the time being in force, a subscriber, at the time of joining the National Pension System is required to make a nomination, in the specified form, conferring on one or more persons the right to receive the amount that may stand to the subscriber’s credit in the accumulated wealth or fund in the event of the subscriber’s death or the subscriber missing and presumed dead as per the provisions of the Indian Evidence Act 1872 and amendments thereto, before that amount becomes payable or having become payable has not been paid. The nominee or nominees, as the case may be, shall be entitled, on the death of the subscriber or the subscriber missing and presumed dead to receive, to the exclusion of all other persons, all such moneys which have so remained unpaid:

Explanation I – For the purposes of nomination wherever provided in this regulation,-

(a) the expression “family”,