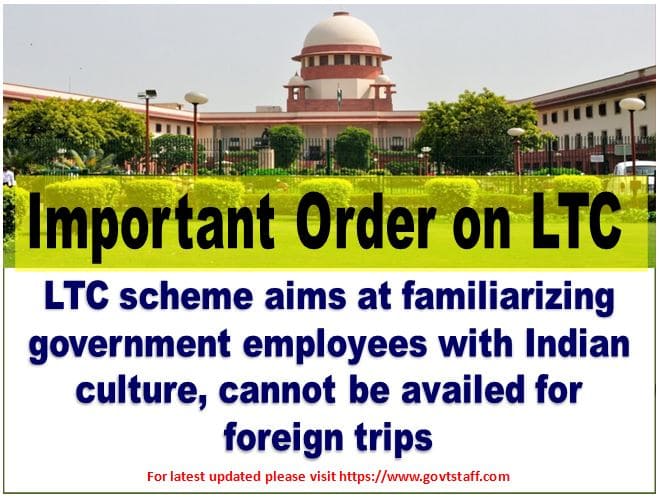 The Supreme Court has ruled that the basic objective of the leave travel concession (LTC) scheme was to acquaint civil servants and government employees with the Indian culture by facilitating their travel across the country, not to conduct foreign trips or long circuitous trips.

The Bench of Chief Justice U.U. Lalit, Justice S. Ravindra Bhat and Justice Sudhanshu Dhulia passed the order on November 4, while rejecting a petition filed by the State Bank of India (SBI) against the Delhi High Court order of January 13, 2020.

The High Court had upheld the findings of the Income Tax Appellate Tribunal (ITAT), noting that the amount received by the employees of SBI towards their LTC claims was not liable for exemption as these employees had visited foreign countries, which was not permissible under the law.

The Apex Court also upheld the High Court order and said that under the LTC scheme, payment made to an employee was exempted as ‘income’ and hence, it could not be brought under any tax, however, the same should be claimed within the framework of law.

View :  Reimbursement of cancellation/reschedule charges for air/train tickets booked for the purpose of LTC and repayment of LTC advance due to Covid-19 pandemic - DoPT OM dated 23.11.2021

However, it noted that LTC was to be availed by an employee within certain limitations of law.

Under the LTC scheme, an employee was allowed to avail reimbursement for travel from one designated place to another within the country, taking the shortest route possible. LTC could not be availed for either foreign travel or long circuitous trips, it added.

As per the case, several employees of SBI had travelled to foreign countries and claimed LTC.

The Income Tax department had contended that some of the SBI employees travelled from Delhi-Madurai-Columbo-Kuala Lampur-Singapore-Columbo-Delhi, adopting a circuitous route.

Appearing for SBI, Senior Advocate K.V. Viswanathan argued that no payment was made for foreign travel, though a foreign leg was part of the itinerary undertaken by these employees. He added that the employees did not claim LTC for their foreign trips only, but also for their travel within the country.

However, the IT department held SBI to be an ‘assessee in default’ for failing to deduct tax from these employees, who claimed LTC in violation of the law.

The Apex Court then delivered the verdict, upholding the Delhi High Court order and noting that the amount received by the employees of SBI towards their LTC claims was not liable for exemption as these employees had visited foreign countries, which was not permissible under the law.

View :  Reimbursement of cancellation/reschedule charges for air/train tickets booked for the purpose of LTC and relaxation of LTC advance due to COVID-19 pandemic - Deptt. of Posts

LTC 46 Court Cases 42 LTC 57 Supreme Court 27
Newer Post
Promotions to Group ‘B’ posts on Indian Railways – Syllabus for professional subjects prescribed by Railway Board for 70% Selections and 30% LDCEs – Railway Board’s order dated 07.11.2022
Older Post
Grant of family pension to other eligible member of the family where first eligible member is charged with offence of murdering the Government servant or for abetting in commission of such an offence.