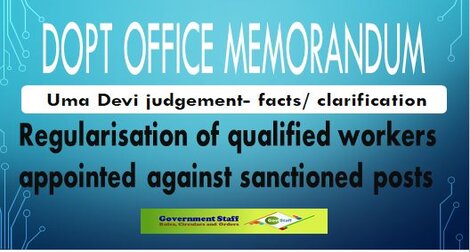 The undersigned is directed to say that the instructions for Regularisation of qualified workers appointed against sanctioned posts in the light of Hon’ble Supreme Court’s Judgement dated 10.04.2006 in case of Uma Devi were issued vide DoPT’s O.M. No. 49019/1/2006-Estt(C) dated 11.12.2006. The above instructions state that:

“…. in the case of Secretary State of Karnataka and Ors. Vs. Uma Devi it was directed that any public appointment has to be in terms of the Constitutional scheme. However, the Supreme Court in para 44 of the aforesaid judgement directed that the Union of India, the State Governments and their instrumentalities should take steps to regularize as a one time measure the services of such irregularly appointed, who are duly qualified persons in terms of the statutory recruitment rules for the post and who have worked for ten years or more in duly sanctioned posts but not under cover of orders of courts or tribunals.

Accordingly a copy of the above judgement is forwarded to all Ministries/Departments for implementation of the aforesaid direction of the Supreme Court.”

i. Equality of opportunity is the hallmark for public employment and it is in terms of the Constitutional scheme only (Para 1).

ii The filling of vacancies cannot be done in a haphazard manner or based on patronage or other considerations (Para 2).

iii, The State is meant to be a model employer and can make appointments only in accordance with the rules framed under Article 309 of the Constitution (Para 5).

iv. Regularization is not and cannot be a mode of recruitment by any State within the meaning of Article 12 of the Constitution of India, or any body or authority governed by a statutory Act or the Rules framed there under. Regularization, furthermore, cannot give permanence to an employee whose services are ad hoc in nature. The fact that some persons had been working for a long time would not mean that they had acquired a right for regularization. (Para 27).

v. Any regular appointment made on a post under the State or Union without issuing advertisement inviting applications from eligible candidates and without holding a proper selection where all eligible candidates get a fair chance to compete would violate the guarantee enshrined under Article 16 of the Constitution (Para 30).

vi Wit is a contractual appointment, the appointment comes to an end at the end of the contract (Para 34).

vii. Regularization, if any already made, but not sub judice, need not be reopened based on this judgment, but there should be no further by-passing of the Constitutional requirement and regularizing or making permanent, those not duly appointed as per the Constitutional scheme (Para 44).

3. Additionally, it is also stated that vide the judgement of State of Karnataka Vs. M.L Kesari dated 03.08.2010, the Hon’ble Supreme Court had clarified some aspects of the Uma Devi judgement which are pertinent for proper understanding of the said judgement dated 10.04.2006. These aspects brought out in the M.L. Kesari judgement are reproduced as under:

i The employee concerned should have worked for 10 years or more in duly sanctioned post without the benefit or protection of the interim order of any court or tribunal. In other words, the State Government or its instrumentality should have employed the employee and continued him in service voluntarily and continuously for more than ten years.

ii. The appointment of such employee should not be illegal, even if irregular. Where the appointments are not made or continued against sanctioned posts or where the persons appointed do not possess the prescribed minimum qualifications, the appointments will be considered to be illegal. But where the person employed possessed the prescribed qualifications and was working against sanctioned posts, but had been selected without undergoing the process of open competitive selection, such appointments are considered to be irregular.

4. It is also clarified that regularisation under Uma Devi judgement was only a one time exercise.

5. It is also emphasized that all concerned administrative authorities should take steps to effectively defend the Court cases on the basis of principles in the Uma Devi judgement and instructions of DoPT within the limitation period without giving any scope to the Courts to decide the cases against the Government on grounds of delay in filing its reply/appeal. Any laxity in the matter to comply with these instructions leading to adverse orders of the Courts shall be viewed seriously inviting disciplinary action in the matter.

All Ministries/Departments of Government of India.
(As per the Standard List)