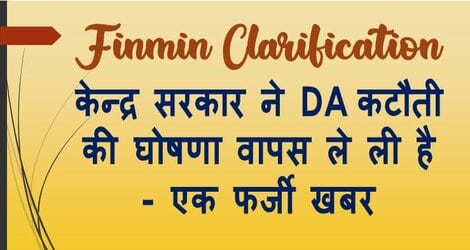 The Centre has not withdrawn its earlier order of DA hike suspension. Government employees and pensioners will continue getting their DAs at 17 per cent rate, instead of the hiked 21 per cent.

A message claiming that the Centre has withdrawn its earlier order to suspend dearness allowance (DA) hike is doing the rounds. Taking to Twitter, the Centre has clarified that it is fake news as no such new order has been passed. Government employees and pensioners receive DA which compensates for rising inflation.

On April 23, it was announced that the central government employees and pensioners will not get the new rates (21 per cent) of DA, which they were supposed to get from January 1, 2020. The rate of DA was hiked from the present 17 per cent to 21 per cent in March. It was also announced that no arrears will be paid from January 1, 2020 to June 30, 2021. The DA rate will be again revised on July 1, taking into account of the previous hikes.

The April order has not been withdrawn, though there are several claims around it.

“A headline has been morphed on a request letter written to the finance minister claiming that the Centre has taken back its order in DA cut. The letter was written in May 2020. Centre has not taken any such decision,” the PIB fact check handle tweeted.