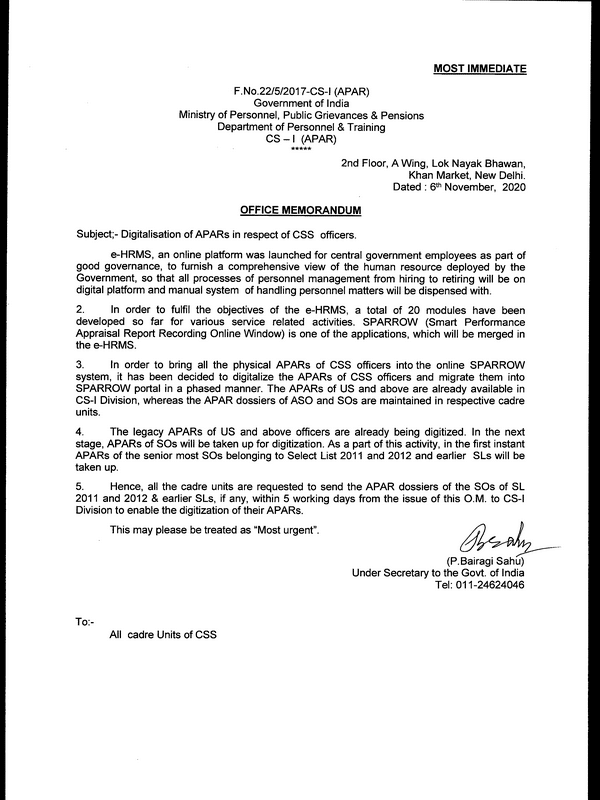 Subject:- Digitalisation of APARs in respect of CSS officers.

e-HRMS, an online platform was launched for central government employees as part of good governance, to furnish a comprehensive view of the human resource deployed by the Government, so that all processes of personnel management from hiring to retiring will be on digital platform and manual system of handling personnel matters will be dispensed with.

2. In order to fulfil the objectives of the e-HRMS, a total of 20 modules have been developed so far for various service related activities. SPARROW (Smart Performance Appraisal Report Recording Online Window) is one of the applications, which will be merged in the eHRMS.

3. In order to bring all the physical APARs of CSS officers into the online SPARROW system, it has been decided to digitalize the APARs of CSS officers and migrate them into SPARROW portal in a phased manner. The APARs of US and above are already available in CS-I Division, whereas the APAR dossiers of ASO and SOs are maintained in respective cadre units.

4. The legacy APARs of US and above officers are already being digitized. In the next stage, APARs of SOs will be taken up for digitization. As a part of this activity, in the first instant APARs of the senior most SOs belonging to Select List 2011 and 2012 and earlier SLs will be taken up.

5. Hence, all the cadre units are requested to send the APAR dossiers of the SOs of SL 2011 and 2012 & earlier SLs, if any, within 5 working days from the issue of this O.M. to CS-I Division to enable the digitization of their APARs.

This may please be treated as “Most urgent’.

All cadre Units of CSS 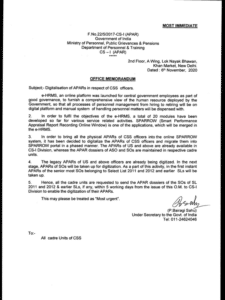