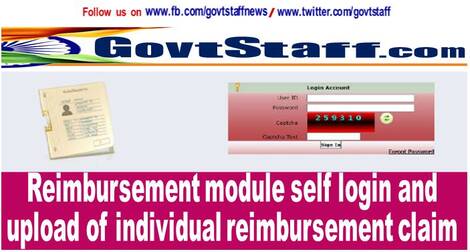 1. Online Bill Processing had been taken up as a pilot project in 2012.Consequently it was operationalised PAN India during 2015.With a Govt mandated Bill Processing Agency UTI-ITSL Carrying out verification/scrutiny in the portal subsequent to uploading of bills by the HCOs or by respective parent Polyclinic.

2. With the gained experience of the online bill processing and with feedback received from environment, Central Org ECHS HQ has endeavoured to facilitate the beneficiaries to upload the claim directly in digital form being provided by the BPA. Individual Reimbursement Claim for OPD, IPD and pharmacy can be uploaded on the website: echsbpa.utiitsl.com. The provision of uploading the claims by the beneficiary is intended to ease the procedure by empowering the beneficiaries to upload their claims themselves. The option to submit the claim documents at parent polyclinics will continue to remain for those beneficiaries who are unable to use the facility.

3. Following instructions will be adhered to while submitting the claims :-

(a) Separate claim will be submitted for each beneficiary. Combining claims of two beneficiaries together is not permitted as each claim will be uniquely linked to the beneficiary card. For e.g. claim of ESM and spouse cannot be combined.

(b) Hard copies of the documents uploaded alongwith signed contingent bill will be submitted to parent Polyclinic within 15 Days of uploading of Claim Online. The format of the contingent bill can be downloaded and printed from the website or obtained from the polyclinic. Claim will be processed further only on receipt of Hard Copy in parent polyclinic.

4. Detailed guidelines for uploading of the individual reimbursement claims provided by BPA is attached as Appx.

5. All command HQ and Regional Centres are requested to disseminate and publicise the facility to the ECHS beneficiaries and their dependants for their benefit. This is expected to ease the procedure for submission of claims as also reduce the footfall at polyclinic.

6. This has the Approval of MD CO ECHS.