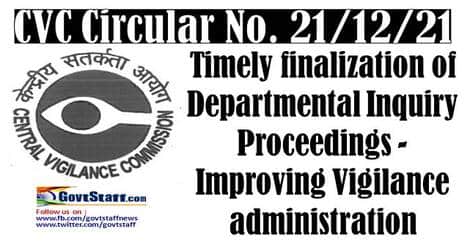 The Central Vigilance Commission. as part of its functions of exercising superintendence over vigilance administration of the organizations covered under its advisory jurisdiction has, time and again, laid emphasis on timely completion of disciplinary proceedings.

2. However, it has been observed that in cases where Regular Departmental Action for Major Penalty has been initiated, one of the main reasons for delay in completion of disciplinary proceedings is due to the delay caused in the inquiry proceedings being conducted by the Inquiry Officers. The Commission, vide its Circular dated 03.03.1999 had prescribed the model time limit for the Inquiry Officers for conducting departmental inquiries. The same was reiterated vide circular dated 18.01.2016. The Model time limit is again reproduced below:-

3. The Commission has directed that the above time schedule should be brought to the notice of all Inquiry Officers (already appointed/to be appointed in future) for strict compliance.

4. The Commission has further directed that all the Inquiry Officers be asked to submit a monthly report to the Disciplinary Authority concerned, indicating the present status/progress of the inquiry proceedings being conducted by them. A copy of the monthly report should also be endorsed to the CVO of the organizations concerned, by the Inquiry Officer. In case, it is found that the inquiry proceedings are getting delayed beyond the prescribed time limit, the CVO concerned should immediately take up the matter with the Inquiry Officer and Disciplinary Authority concerned to ensure timely action.

5. The above instructions may be noted for strict compliance and may also be brought to the notice of all the Disciplinary Authorities and Inquiry Officers.