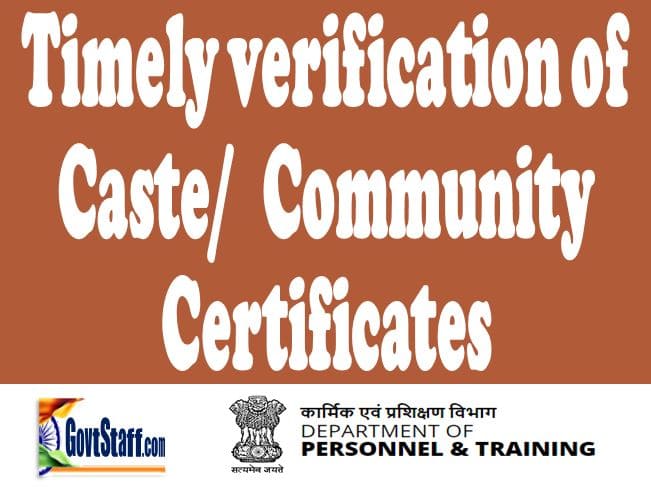 I am directed to say that Government of India has been issuing instructions from time to time to all the State/UT Governments for streamlining the process of verification of caste/ community certificate and ensuring its timely completion.

2. In this regard. it is stated that Akhil Bhartiya Adivasi Vikas Parishad (ABAVP). a Society registered under the Societies Registration Act, had submitted a representation to the Parliamentary Committee on the Welfare of SC and ST and brought to their notice that pensionary benefits of some of the employees belonging to ST category in the Central Government offices in Tamil Nadu were withheld on the ground of pendency of their caste verification. The Parliamentary Committee has taken serious view of it and has emphasized upon timely verification of caste certificate of the employees. The Committee has also made recommendations in the matter in its Ninth Report on the subject “Study of atrocity cases against Scheduled Castes and Scheduled Tribes with respect to implementation of the Prevention of Atrocities Act. 1989″. In view of the concern shown by the Parliamentary Committee. a letter dated 19.03.2021 was issued to all the States/UTs vide which their attention was invited towards this Department’s various instructions issued from time to time requesting the States/ UTs to ensure timely verification of caste certificate of the employees. However. a reference dated 14.06.2022 has again been received from Akhil Bhartiya Adivasi Vikas Parishad (ABAVP) in which the Parishad has stated that the pensionary dues of some of the employees belonging to ST category have still not been released by the Central Government offices on the ground that that their caste verification is still pending.

View :  Collection of vacancies for UD Grade LDCE for the SL Year 2018 to 2020 and abolition of vacant sanctioned posts of SSA in compliance with the cabinet decision

3. In this regard, it is reiterated that the responsibility for the issue and verification of Caste Certificate lies with the concerned State/UT Government. The Hon’ble Supreme Court, vide its order dated 02.09.1994 in the matter of Kumari Madhuri Paril vs Addl. Commissioner, has laid down the detailed guidelines for effective verification of the Caste Certificates of the employees by the State Government, so that no person on the basis of fake caste certificate, may secure employment wrongfully in the Government.

4. It is reiterated that States/UTs are required to complete timely verification of the caste certificates of the employees. The respective State Government authorities are required to ensure at their own level that veracity of the Caste/Community certificate referred to the district authorities is verified and reported to the appointing authority within one month of receipt of request from such authority. The State/L’T Governments are also required to initiate disciplinary proceedings against the officers of the State who default in timely verification of Caste Status. In this regard, copies of the DoPT letter No. 36022/1/2007 — Estt (Res) dated 20.3.2007; DoPT letter No. 41034/3/2012 — Estt (Res) dated 11.4.2012: DoPT letter No. 3601 1/1/2012-Esn (SCT) dated 14.35.2016 and DoPT letter No. 41034/4/2020-Estt (Res-I) dated 19.3.2021 are enclosed.

During the conference of the Secretaries of the State/UTs organized by this Department on 28.09.2022 at CSOI. KG Mare. New Delhi the attention of the officers of the State/UT Governments were invited towards the aforesaid instructions and they were requested to ensure timely verification of the caste/ community certificate of the employees.

5. In view of the above, all the State/UT Governments are once again requested to ensure adherence to the instructions issued by this Department from time to time with regard to timely completion of the process of caste verification of the employees.