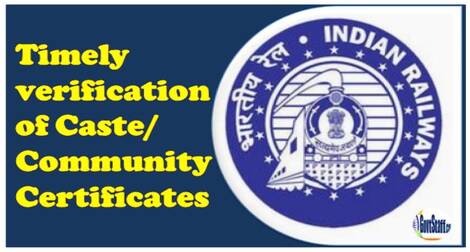 The General Managers (P)
All Indian Railways
And Production Units.

Please find enclosed herewith a copy of Ministry of Personnel, Public Grievances & Pensions (Department of Personnel and Training), Office Memorandum No. 41034/4/2020-Estt (Res-I) dated 19.03.2021 alongwith enclosures, addressed to Chief Secretaries of all States/Union Territories, requesting to ensure that the process of caste verification is completed within a reasonable time, and the concerned appointing authorities are informed about the veracity of the Caste Certificate of the candidates/employees within one month of the receipt of such request from the concerned appointing authority, for information and further necessary action.

From time to time various guidelines have been issued for streamlining the process of verification of Caste Certificate of the employees, and Department of Personnel & Training (DOP&T) have requested the State/UT Governments for timely verification of the same.

In this regard attention is also invited towards Railway Board’s letter No. 2016-E(SCT)I/31/1 dated 23.06.2016 regarding verification/acceptance of caste certificates produced by candidates, through which DOPT’s OM No. 3601 1/1/2012-Estt.(Res.) dated 08.10.2015 was circulated to all Zonal Railways/Production Units, wherein it has been inter-alia stated that timely and effective verification of caste status is necessary so that the benefit of reservation and other scheme of concessions etc. go only to the rightful claimants. It also conveys that where a candidate belonging to a Scheduled Caste, Scheduled Tribe and Other backward Classes is unable to produce a certificate from any of the prescribed authorities, he/she may be appointed provisionally on the basis of whatever prima-facie proof he/she is able to produce in support of his/her claim subject to his/her furnishing the prescribed certificate within a reasonable time and if there is genuine difficulty in his/her obtaining a certificate, the appointing authority should itself verify his/her claim through the District magistrate concerned.

Attention is also drawn to Railway Board’s letter No. 2017-E(SCT)I/25/4 dated 08.11.2017, wherein it has been reiterated that Caste Certificate submitted by candidates should be verified within a reasonable time.

However, still instances have come to notice that the appointing authority has taken an unduly long time in getting the caste status of an employee verified through the concerned State authorities which is totally in contravention of the existing instructions.

Hence, the above may be brought to the notice of all concerned for information and further necessary action.