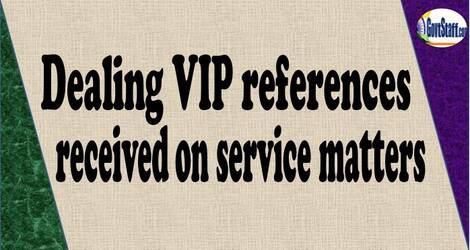 F.No.A-26017/70/2021-Ad.IIA
Government of India
Ministry of Finance
Department of Revenue
Central Board of Indirect Taxes & Customs

Subject:- VIP references received on service matters in CBIC- regarding

The undersigned is directed to say that a number of officers of Central Board of Indirect Taxes and Customs (CBIC) have been submitting their representations on service matters through other authorities bypassing prescribed channel of communication. In this regard, DoP&T has issued instructions vide O.M. no. 11013/08/2013-Estt. (A-III) dated 31.08.2015 which was circulated to all Cadre Controlling Authorities under CBIC vide Board’s letter dated 03.02.2020 (copy enclosed)

2. The DoP&T O.M. dated 31.08.2015 stipulates that such submission of representation has to be viewed seriously and appropriate action should be taken against those who violate these instructions. This can nightly be treated as unbecoming conduct attracting the provisions of Rule 3(1) (i) of the Central Civil Services (Classification, Control and Appeal) Rules, 1964. It has also been clarified that this would include all the forms of communication including through e-mail or public grievance portal, etc.

All Cadre Controlling Authorities under CBIC