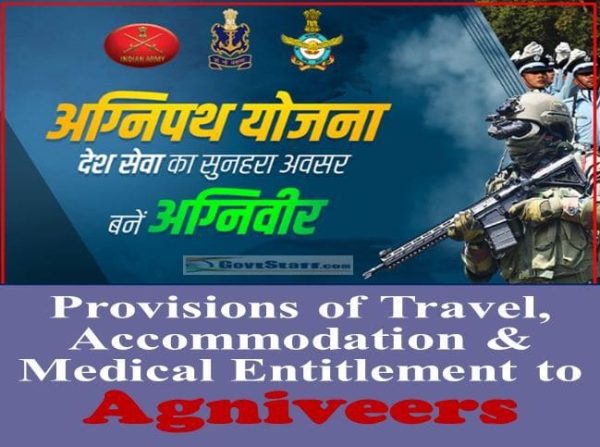 I am directed to refer to Ministry of Defence letter no. DMA/JS (N&DS)/2021/Agnipath-01 dated 15.06.2022 on the above subject and to state that in pursuance of the Government’s decision to implement the Agnipath Scheme, 2022. following provisions have been laid out for the purpose of Travel, Accommodation & Medical Entitlement to Agniveers:

1. Agniveer selected and reporting to the recruitment centre would be reimbursed AC —III Tier / AC Chair train fare from their home to the designated recruitment centre or actual cost of travel expenses whichever is less. Similarly, Agniveer would be entitled for AC —III Tier / AC Chair Car in all types of entitled train(s) by ERW from training centre to the designated unit on successful completion of training.

2. Rail. Agniveer will travel by AC -III Tier / AC Chair Car in all types of trains by availing FRW while travelling on duty. In case of travel by any other mode the reimbursement would be restricted to AC —III Tier fare of superfast train or actual cost of Travel expense, whichever is less.

3. Sea. Agniveer will travel by the lowest class of ship i.e. Bunk Class operated by Shipping Corporation of India.

4.  Road. Actual fare by ordinary public bus or at prescribed rates for auto rickshaw or Rs 12 per KM if no rates are prescribed.

6. Entitlement on Posting (Self Only). Agniveer on posting would be entitled Lump Sum posting allowance as follows:

7. Recall from Leave. An Agniveer granted annual leave who is recalled to service before the completion for the first half of his leave, may again be granted free conveyance to and from his home town when granted leave subsequently. This would be in addition to his entitlement under LTC. Further the rail fare from his home town to the unit when recalled will be reimbursed provided he has not proceeded on LTC.

8. Conveyance for Interview / Medical Examination etc. Agniveers when called for interview, medical examination etc for recruitment will be entitled to rail fare by AC — III Tier from place of residence in India to the place of interview and back. For places not connected by rail, actual bus fare will be admissible.

9. Conveyance on Exit (Self Only). The Agniveer on Exit from Service will be entitled as per the entitlement on Posting. The payment will be made on publication of Non Effective DOPT II / Gen Form / POR.

10. Conveyance Related to self-illness. The Agniveer would be entitled as follows in respect of Illness: –

(a) Free conveyance will be admissible to the Agniveer when admitted to Civil Hospital, when transferred to Service hospital in the same station or another station when the condition of the patient permits such transfer.

(b) Free Conveyance by Rail / Air as indicated below will be granted to such number of persons as mentioned below in respect of an Agniveer reported as dangerously ill either in civil hospital or a Service hospital or to attend the funeral of an Agniveer within Indian limits provided that the death is not due to the individual s own misconduct:-

(ii) To attend the funeral of an Agniveer – Two Persons

(iii) Rail. The visitors will be entitled to travel by by AC — III Tier / AC Chair Car in all types of trains in cash which will be reimbursed both ways. In case of travel by any other mode the claim would be restricted to AC —III Tier fare of superfast train.

(iv) Air. Air journey may be permitted to one relative in case of Agniveer being placed on dangerously ill list / to attend the funeral. The second relative to travel by rail. However, if the relative travelling by air is a lady or a male above the age of 60 years or physically handicapped then the second relative may also travel by Air.

(v) Return Journey. ‘The return journey in all cases by the relatives will be performed as per entitlement given to Agniveers vide para 2, 3 and 4 above.

11. Conveyance to the relative of Aqniveer who are Battle Casualty. Two relatives of  Agniveer will be entitled to visit the Agniveer once every six months who is a battle casualty undergoing treatment in the Hospitals for more than three months.

12. Killed in Border/Line of Control (LC), operation/Counter-insurgency (CI) operations in India and abroad.

(a) The dead body will be embalmed and coffined for the purpose of transportation. The cost of embalming will be restricted to the extent of actual expenditure as charged by the Government Hospital and that of coffin should be the barest minimum on the basis of austerity standards.

(b) The dead body will be transported by fastest mode of transport available accompanied by only one person who may either be a member of the family or person deputed by the family or a unit representative from the place of occurrence as the case may be upto his Hometown or place of last rites.

(c) in case of death occurring in inaccessible areas requiring more than 12 hours of the journey time, the body will be evacuated by service helicopter to the nearest Hospital for embalming purposes and thereafter will be moved by fastest mode of transport to the nearest airport/airfield from where the body will be flown/moved by commercial flights our courier flight to the Hometown/place of last rites.

(d) TA (without halting allowance and incidentals) will be admissible to one member of the family/person deputed by the family for the journey performed by Air/Steamer/Rail/Road to reach the place death/designated place of enable him to accompany the dead body of the deceased.

(a) If death occurs while at Permanent HQ in India and family desires to transport the body of the deceased Agniveer to his hometown, this will have to be done under own arrangements subject to the reimbursement of the amount due to them as admissible on posting.

(b) If death occurs while on tour in India or abroad, the body may be brought by air on a commercial flight to the HQ or to hometown according to the wishes of the family.

14. Entitlement on LTC (Self only). Agniveer would be entitled for the following:-

15. Agniveer posted to field areas, Andaman & Nicobar Islands would also be entitled for an additional FRW including Sea Passage to visit the home town every year.

16. Agniveer serving in Ladakh region are allowed to travel by air on LTC between Leh and Srinagar / Jammu / Chandigarh / Delhi only during the period between 01 Nov to 31 May. The to / from journey between one of these places and hometown will be performed its the entitled class of travel.

17. Agniveer’s serving in Manipur / Mizoram / Tripura / Cachar and North Cachar districts of Assam including Silchar are allowed to perform journey by air between Imphal / Aihwal / Agartala / Silchar and Kolkata while proceeding on / returning from LTC. The to /fro journey between one of these places and hometown will be performed in the entitled class of travel.

18. LTC during Deployment on UN Missions. Agniveers posted to UN Missions, proceeding on leave to and returning from India at their own expenses will be entitled to LTC within Indian limits for self from / to the port of disembarkation / embarkation in India, if otherwise due under the normal rules.

19. An Agniveer will be accommodated in the Living in accommodation of the OR / Sailor / Airmen Mess. Agniveer is not entitled for any type of allowance in lieu of accommodation.

20. Agniveers are entitled for Medical facility at Service Hospital as approved vide Para 6.6 of Annexure 1 to Cabinet Note. However, in case of emergency, if Service hospital / Govt hospital is not available nearby Agniveer is entitled to reimburse the medical expenses. All reimbursement in respect of hospitalization / Medicines /Services / Facilities etc would be on not exceeding basis at the rates laid down by ECHS/CGHS.

21. O/o CGDA in consultation with SHQs would design a common Claim form in respect of TA / DA with minimum documentation and data.