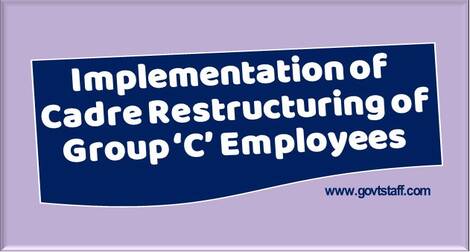 Implementation of Cadre Restructuring of Group ‘C’ Employees of Dept. of Posts

Implementation of Cadre Restructuring of Group ‘C’ Employees of Dept. of Posts

To
The Secretary
Department of Posts
Dak Bhawan, New Delhi – 110001

Our union wish to point out the following factual position regarding the implementation of the cadre-restructuring and plead for the fixation of the date of effect notionally as 27-05-2016 as per the Directorate instructions.

2. In Kerala Circle as first step the Posts/offices for upgradation were identified. A circle gradation list was also circulated. Some officials approached the Hon’ble CAT challenging the gradation list. The Hon’ble Court has stayed the process of Cadre Re-structuring and our Circle could not go further on the matter observing Directorate instructions either by completing DPC process by 31-12-2017 or issuing orders of posting by 31-01-2018. Completing the Court proceedings the Hon’ble CAT has lifted the stay orders and permitted the department to go ahead with the cadre re-structuring process with the existing gradation list. Accordingly after a long gap of 4 years the cadre-restructuring of Group C officials has been implemented in the month of July 2020.

3. All other circles except Kerala has completed the Cadre Re-structuring process and extended the benefits to the eligible officials within the time frame fixed by the Directorate. Kerala Circle could not implement and extend the benefits for the last 4 years due to the simple reason of a court case. Though the cadre re-structuring is a Pan-India issue and orders has been in force at National level, the denial of the benefit to a section of employees in a circle for more than 4 years based on a locally promulgated court case is unjustified. More over the Hon’ble Court has not mentioned any adverse comment about the date of effect while disposing the case. Normally the date of effect fixed by the Directorate is applicable to our circle also. Para 4.5 of the Charles Lobo Committee report reads as under:

“For the sake of uniformity, the promotions will be effective from the date of the original order dated 27-05-2016. It will be applicable to all eligible officials including those were in service but now retired.”

4. In Kerala Circle uniformity has been tampered and as a result the benefit of Cadre Re-structuring is delayed by 4 years. In other circles the officials promoted to the cadre of LSG with effect from 27-05-2016 will get promotion to the higher cadres i.e. HSG-II and HSG-I after the completion of 6 years and 5 years as stipulated in the existing recruitment rules. But the officials in our circle will have to wait more years to get their promotion to the higher cadres. Many officials are at the fag end of their service and naturally they will be compelled to retire from the existing cadre without enjoying the benefits of the approved promotion scheme.

Read also |  Deduction of TDS in respect of aggregate Cash Withdrawal above Rs. 20 lakh by an  account holder of National (Small) Savings Schemes for non ITR filer under section 194N of I.T. Act 1961 - SB Order No. 05/2021

Considering the above valid points, we would like to urge upon you to kindly issue suitable orders to ensure the date of effect of cadre restructuring as stipulated by the directorate i.e. 27-05-2016.

Hoping for an early and positive action with regards,